The 2007 Dutch HRCA AGM was held on Sunday 13th May 2007. Host this time was Duco Postmaa. Duco is soon moving house, so he invited us all to have a last look at his train room. As usual we had an excellent meeting. Duco has a passion for tin toys in general, so we learned quite a few new interesting things on antique toys in general.

The station area of Ducos 0-gauge layout. A E320 Royal Scot is waiting with a train made up from No. 2 Special Pullmans. The signals and lamp standards are from other manufacturers. You can also spot a train of Marklin coaches at the station building, while some Buco coaches are waiting in the back. Duco is currently restoring a Hornby Signal Gantry: the lower part already finished is placed at the station. 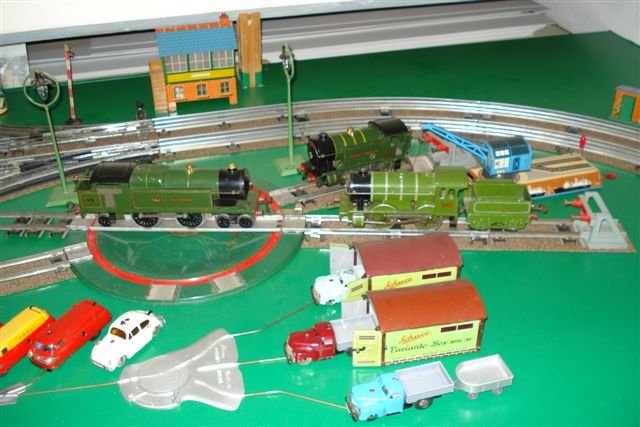 In the goods area a nice selection of Hornby 2-wheel goods vans and some locomotives. The yard crane is from the German manufacturer Biller Bahn.

The layout is all around the trainroom where, in front of the door, a bridge is cleverly made using Meccano. This bridge can be lifted out of the layout, giving full access to the train room. Since Paul has the same idea for his future train room, the work done by Duco (standing in the doorway) has been subject to a close inspection. 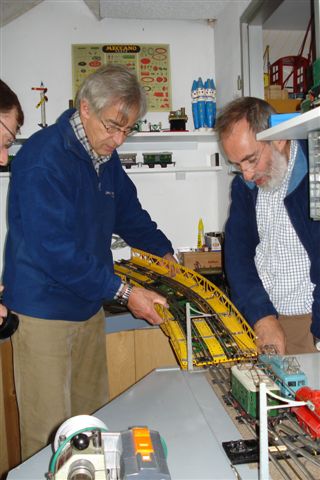 This building on the layout is made with Mobaco. Mobaco was manufactured by the Dutch company Mobal between 1920 and 1960 in Zeist (near Utrecht). In some respects this set is very similar in its principles of construction to Bayko. 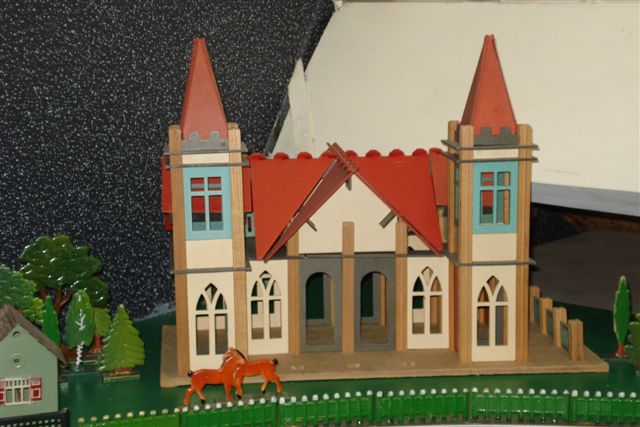 In front you can see an electric locomotive, made by Kraus. This locomotive was made in the 30's, and was one of the first locomotives with functional pantographs. Duco has added a few meters of test track for this special loco. Paul, being the founder and sole member of the Dutch Kraus Circle, was delighted to see this loco run. Just next the Kraus loco a more modern post-war counterpart from the French Hornby factory. The building is made up from The Anchor Stone Building Sets. 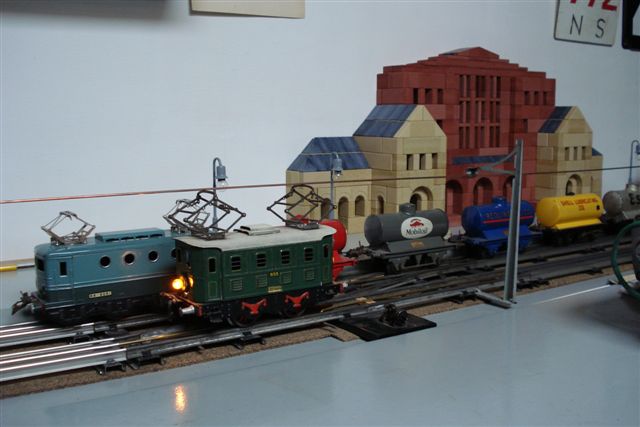 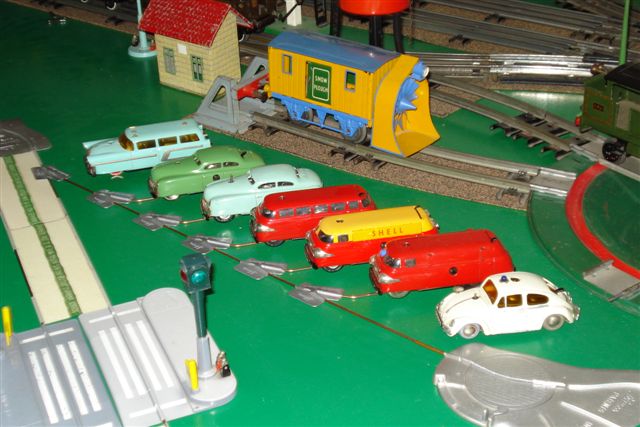 Duco has an impressive collection of Schuco Varianto cars on his layout. A road-track is fully operational, with crossing, passing loops and some sheds. 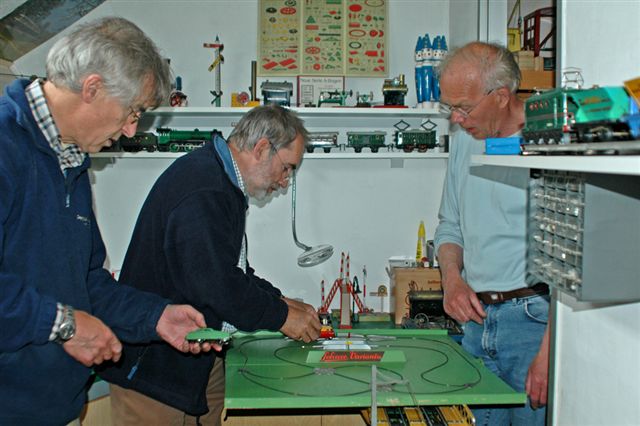 A very rare item is the Schuco dealer demonstration board. 2 Cars can be placed on the board, driving on the wire track. One car arriving at the terminal will set the other car in motion. Jacob Wieringa (right) joins Paul and Duco with the demonstration. 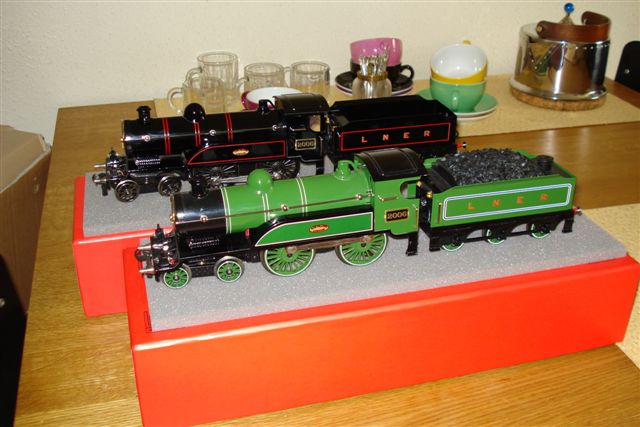 Peter Zwakhals and Niek van Ees brought the new ACE trains E/3 Celebration Class locomotives along. Both LNER, one in goods black and one in passenger green. 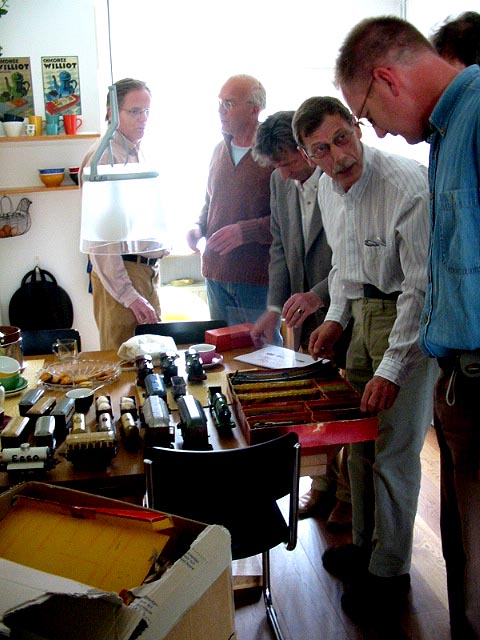 Busy moment at one of the sales tables. Gert Jonker (left) had brought some nice Hornby items for sale. Jacob Wieringa, Niek van Ees, Hans van Dissel and Peter Zwakhals have a look at the items. 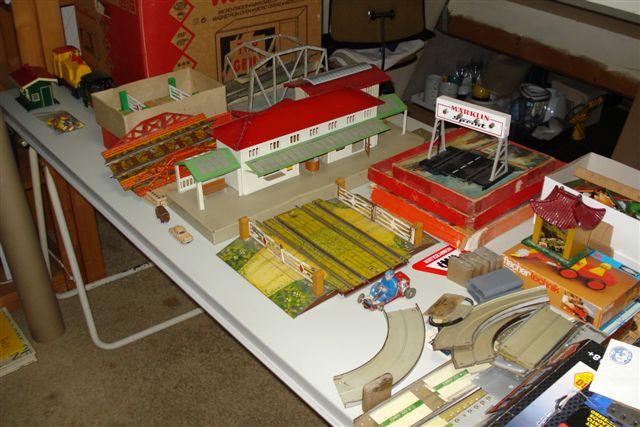 Our host Duco had also set up a nice array of toys for sale. 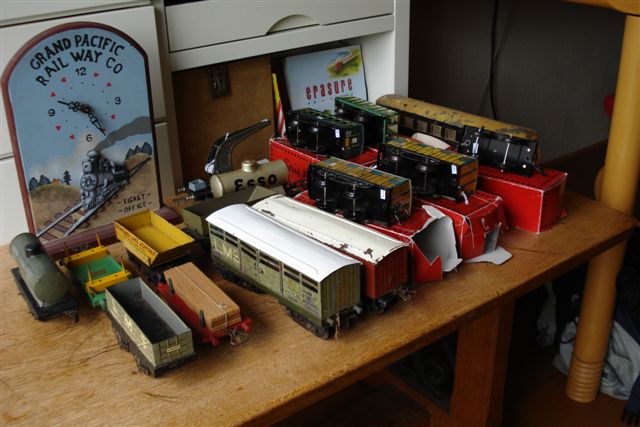 And Paul was trying to sell some of his Hornby items too.